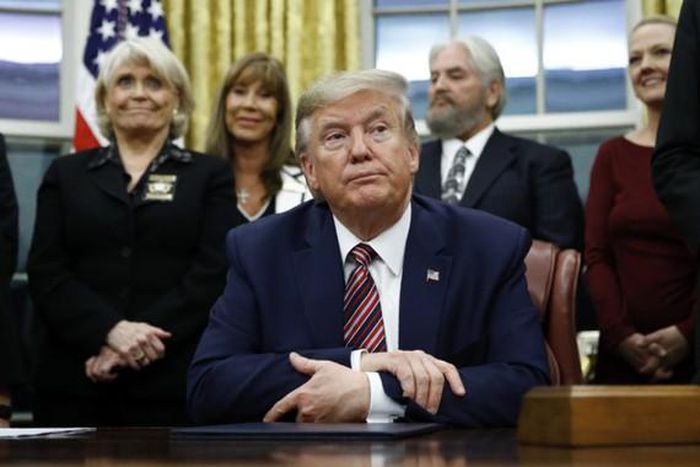 "Mob violence goes against everything I believe in and everything our movement stands for," Trump said in a message from the Oval Office.

Both Democrats and Republicans have suggested Trump incited violence with statements he made before the riot.

In her resignation letter, Education Secretary Betsy DeVos told Trump: "There is no mistaking the impact your rhetoric had on the situation, it is the inflection point for me."

"The President of the United States summoned this mob, assembled the mob, and lit the flame of this attack," GOP Conference Chairwoman Liz Cheney, of Wyoming, similarly said in a statement explaining her support for impeachment. Others, like House Minority Leader Kevin McCarthy, R-Calif., warned that impeaching the president would further divide the country at an already difficult time.

Although Trump has generally called for peaceful protests, the attacks followed soon after he spoke from the Ellipse near the White House, telling a crowd of supporters to continue challenging the 2020 election results that gave President-elect Joe Biden the win and take that fight to the Capitol.

"I know that everyone here will soon be marching over to the Capitol building to peacefully and patriotically make your voices heard," he said.

Rioters could be seen with pro-Trump banners. At least five people have died in relation to the riots.

With just days before Biden's inauguration, scheduled for Jan. 20, the FBI reportedly warned that armed protests were planned at all 50 state capitals.

"In light of reports of more demonstrations, I urge that there must be NO violence, NO lawbreaking, and NO vandalism of any kind," Trump told Fox News earlier on Wednesday.

"That is not what I stand for and it is not what America stands for. I call on ALL Americans to help ease tensions and calm tempers. Thank You."

He noted that federal agencies were directed to prevent violence while thousands of National Guard members were called in to protect the nation's capital and "ensure that a transition can occur safely and without incident."

Trump's video also urged followers and big tech companies to avoid inflaming the tensions gripping Americans in the final days of his term in office.

Twitter specifically banned him after he said of the riot: "These are the things and events that happen when a sacred landslide election victory is so unceremoniously & viciously stripped away from great patriots who have been badly & unfairly treated for so long. Go home with love & in peace. Remember this day forever!"

"The efforts to censor, cancel, and blacklist our fellow citizens are wrong and they are dangerous," Trump said. "What is needed now is for us to listen to one another, not to silence one another."